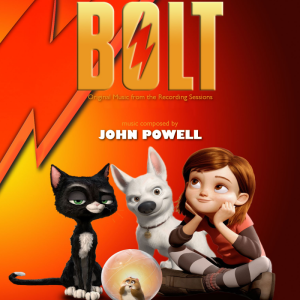 ” If Bolt’s taught me anything, it’s that you never abandon a friend at a time of need!” thus Rhino expressed emphatically.

Bolt, an under appreciated movie from Walt Disney Pictures. Its not Disney Pictures, It’s not Pixar, No its Walt Disney Pictures which actually produces some of the best animated filming the company can put out! Bolt gives heart to the viewer. Anyone who loves animals can appreciate the story of Bolt. A dog who thinks he is a super hero and learns he is just a normal dog and then appreciates his person. Along the way he gains two great friends, Mittens and Rhino. They all discover what it means to stick together as a family.

Of course you have to have a little fun along the way, there is plenty in Bolt! John Travolta is great for voicing the dog Bolt and John Powell does a fantastic job weaving the love and the adventure into one movie. John Powell is probably one of my favorite animated film composers. He has done the How to Train Your Dragon Series, the Shrek Series, The Kung Fu Panda series, The Rio series, Rango, and the Ice Age films! That is just a short list of films he has composed for. You should check out his IMDB page for more!

I’m going to give you a taste of the score to Bolt and hope you can be touched by the amazing work that John Powell does.

One Last one for today…I Thought I Lost You with John Travolta & Miley Cyrus.

Well that is all this week guys, hope you liked it. See you Sunday for Big Trouble in Little China. Happy Listening!